Understand the Arithmetic Mean with Legos

One of the most basic statistics that we encounter in day-to-day life is called the average, or arithmetic mean. What is the mean, exactly?

Most people, though, apply this conceptual definition of the average and then proceed to calculate the value by summing up all the values and then dividing that result by the number of values.

Grade school stuff, right? Sure enough, but it turns out there's some other interesting ways to think about the average.


A more spatially oriented view of the average is to think of all the values, including the average, as having a location in a one dimensional space (on a typical number line, if you will). Now measure the distance from the average value to each individual value in the data set (negative distance if less, positive if not). The amazing property is that these values add up to zero1!

The average truly seems to be the centered value of a data set. This is an interesting concept since it starts to change your conceptual view of the average from the 'most common' to one that resides in the physical world that includes distance.


The idea of an average being the center of something is interesting. What if we thought about the average as if it were the center of gravity of a data set - as if it balanced the weights of the individual numbers comprising the data set? I encountered this weight or balance oriented point of view while reading through a CK12 Foundation textbook (referenced at the end of this article)2.

Imagine we want to know how the jelly bean wealth is distributed among a population of eight people. We could look at this graph: 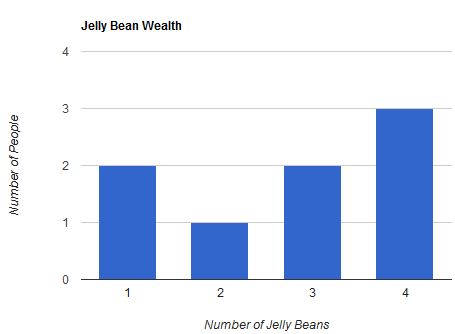 From the graph, we can see we have 8 total people. If you were to add up all the jelly beans each person had, you would end up with 22 jelly beans. By our layman's logic, there's an average of 22/8 = 2.75 jelly beans per person.

Boring, right? How about we make a real-world Lego block representation:

That's better. Let's see how this 'balances' when I try to treat two jelly beans as the center of the data set:

Now let's try the average (well - close to the average, I have to fit the block in a preset hole):

It balances! Doesn't that completely change your perspective about averages? It did mine. Next time you encounter an average, I hope you'll think about it slightly differently than before. Happy averaging!

Email ThisBlogThis!Share to TwitterShare to FacebookShare to Pinterest
Labels: math